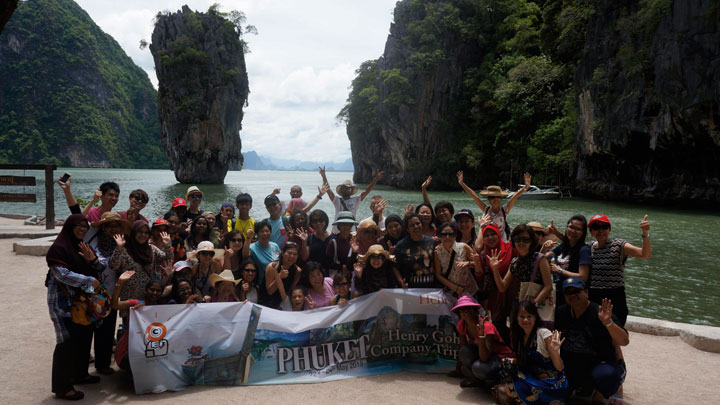 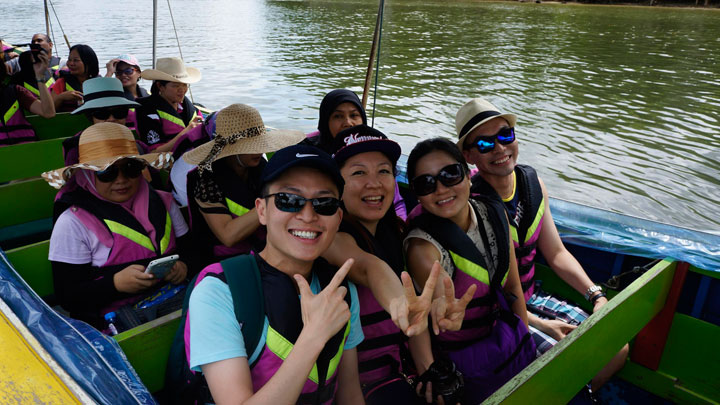 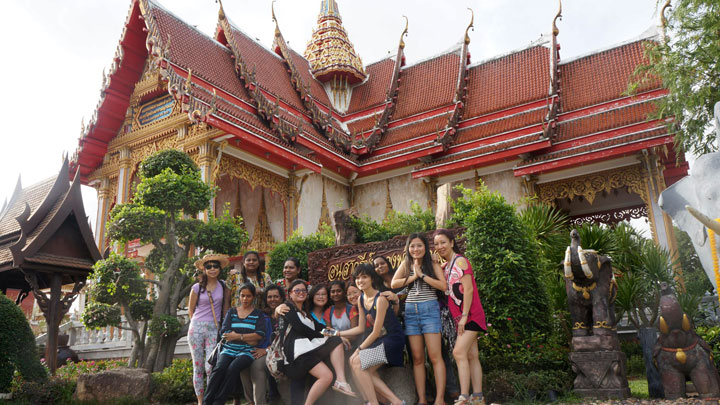 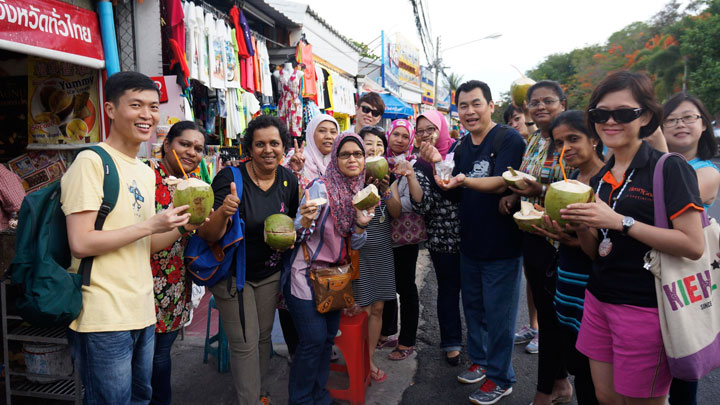 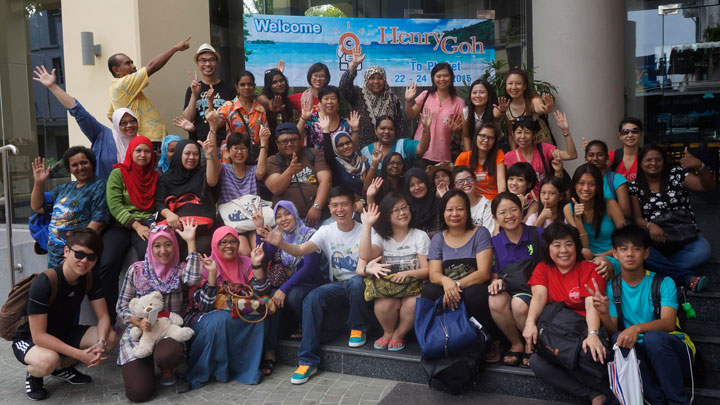 This year’s company trip was an exciting one as it was our first trip abroad. After months of preparation and planning, 22 May 2015 finally arrived and the people of Henry Goh jetted off for some sun, sea and shopping. Phuket is a province south of Thailand consisting of the island of Phuket, the largest island in the country and 32 smaller islands off its coast facing the Andaman Sea. It is a booming tourist area and one of its wealthiest provinces.

Having caught the 1.5 hour flight from KLIA2, our tour of Phuket immediately began upon our arrival. Our first stop was the famous Sribhurapa Orchid cashew nut factory in the area of Changwat. The cashew nut is a native produce commonly grown in Phuket and other surrounding areas in southern Thailand. There were so many types of coated cashew nuts given out as samplers with flavours such as “tomyam”, butter, coconut, chocolate, honey, garlic, sour cream, chilli, barbeque that made it so much more difficult for us to decide which to purchase!

The next destination was a bee farm in Chalong where we were greeted by a giant bee hive at the entranceway, believed to be one of the oldest and largest hives in the country. A short presentation was given on the benefits of honey to our health before another sampling round began. From the bee farm, we then travelled to Wat Chalong, one of the many Buddhist temples in Phuket. Built in 1837, it is the most significant of the 29 Buddhist temples in Phuket. Dedicated to two highly respected monks and former abbots of the temple – Luang Pho Chaem and Luang Pho Chuang, who led the people of Chalong against the Chinese Coolie Rebellion in 1876. Statues of the monks were erected at the temple complex in their honour. Like many Buddhist temples, the temple complex is architecturally stunning with intricate carvings and decorations on the walls, columns and roofs.

Before adjourning for dinner, we were then driven to the Laem Phromthep viewpoint near Rawai. It is a site famous for its commanding views of spectacular sunsets and panoramic views of the southern tip of Phuket and the Andaman Sea. It is also the site of an elephant shrine and the Kanchanaphisek Lighthouse, built in 1996 to commemorate the King’s 50th anniversary of his accession to the throne. It was also an opportune time for us to cool off with a fresh coconut. We ended the evening with a scrumptious Thai dinner spread before adjourning to the hotel.

Day 2 proved to be as exciting as the first day when we visited the ever popular James Bond Island. Locally known as Khao Phing Kan, it is located in Phang Nga Bay in Ao Phang Nga National Park. The island was featured in the 1974 James Bond movie The Man with the Golden Gun and is a big hit with tourists wanting to catch a glimpse of the filming location. The trip to the island involved a traditional Thai longtail boat ride around Phang Nga Bay soaking in the views of limestone karst formations, mangrove forests as well as eroded rocks and islands of various shapes. After countless photo opportunities on the island, we were treated to a sumptuous traditional Thai lunch at the nearby Muslim fishermen’s village on Koh Panyee. It is a ring of houses built on stilts around a rocky island, a popular lunch spot for tourists visiting the area.

Phuket without any shopping would not be complete and off we went to the Madunan T-shirt outlet. With hundreds of designs to choose from at a bargain price, it made souvenir shopping a breeze. Dinner was served at the waterfront restaurant of the Royal Phuket Marina. A buffet spread of Thai food with panoramic sceneries of the marina parked with grand yachts and ships was indeed a pleasure to the taste buds and the eyes. We ended the night free and easy, catching up with more shopping and the must do Thai massages before calling it a day.

The next morning, the people of Henry Goh left the hotel after a leisurely breakfast to catch the flight back to Kuala Lumpur. All in all, it was a truly memorable trip as Phuket was a destination with many cultural, gastronomical and visually stunning places to visit. It was time well spent bonding with one another and we can’t wait for our next international trip!

After two long years of missing out on the camaraderie of our global IP associates at INTA’s annual meeting, we ...

Even as Malaysia opens our international borders on 01 April 2022, we will continue to harness technology in connecting us ...

Dave A Wyatt, Executive Director in our Malaysia office, has been recognized in IAM Global Leaders 2022, a compilation of ...